Bhutan’s km² are only 47,000. The small Asian state nestled between Tibet and India, is not very vast, but it’s full of happiness. Since a couple of years, it has been introduced an additional indicator next to the traditional GDP: the GNH, which is the gross national happiness index, to calculate the population welfare. Although, Bhutan occupies the last positions in the world ranking of GDP, if you take into account air quality, public health, education, wealth of social relationships, the ranking is reversed, bringing it to be among the first positions. Perhaps, the Bhutanese are also helped by Dalai Lama, staunch supporter of GNH, who declared that that the purpose of life is to overcome suffering and achieve happiness.

What is certain is that on February 6th, the country had an increase in internal happiness thanks to the birth of the royal baby! The beautiful Queen Jetsun Pema and King Jigme Khesar Namgyal Wangchuck gave the news from their respective Facebook profile not only to their subjects, but to the whole world, presenting officially baby Gyalsey. And to celebrate him in the best way, at the beginning of March 100,000 volunteers of the Himalayan state, among them also the Prime Minister Tshering Tobgay, three of his ministers and the opposition leader, have planted exactly 108,000 trees. 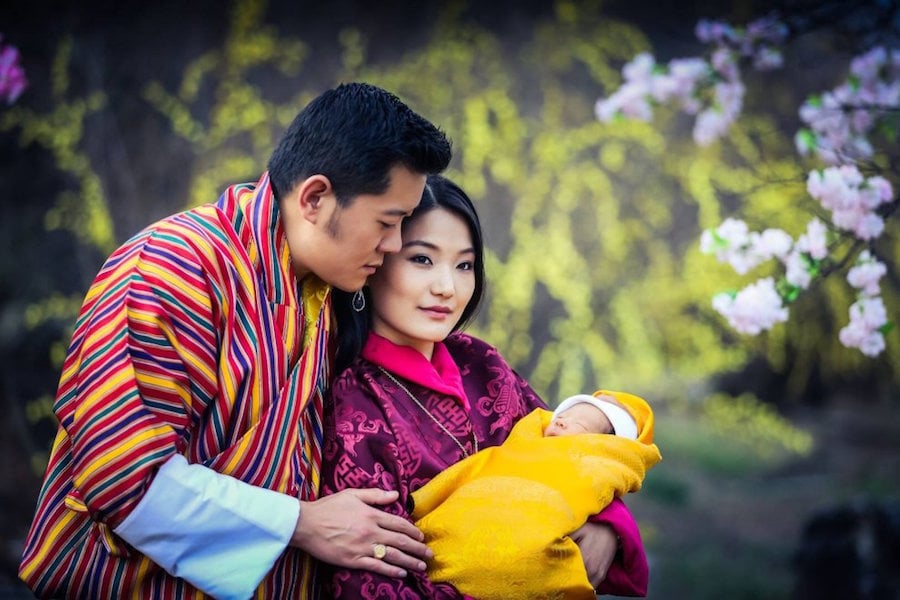 Why 108,000 and not one more or one less? Because according to the traditions of Buddhism, 108 is a sacred number denoting the cleaning by as many contaminants that would prevent a man to attain enlightenment. Each planted tree has been sealed with a prayer for the heir to the throne, as tradition dictates. It may seem an unusual practice, but in Bhutan love for nature is particularly acute due to the fact that the state aims to become the first one 100% bio and achieve the goal of zero waste by reducing waste.

In 2015, it was marked in the Guinness Book Records for a similar action: planting 50.000 trees in only one hour. Love for the nature is also the founding pillar of the Bhutan’s constitution, which states that at least 60% of the land must always be covered by trees. Once again, the green spirit of Bhutanese is increased and supported by its state religion: according to Buddhism, the tree is considered a source of nourishment for all forms of life; It symbolizes longevity, health, beauty and even compassion.

We just have to take as example making even our lands greener and wish long life to the future king and ... to all 108,000 trees planted in his honor!