A TANZANIA TRIP TO REMEMBER

Last year we ran a competition with the Treedom community, offering the chance for two people to visit one of our projects in Tanzania! The lucky winners, Vera and Corinna, were able to gain an insight into our work with the farmers and their families, visiting the tree nursery and distributing seedlings. We also wanted them to experience the beauty of Tanzania, so sent them off on a handful of safaris! Below, Vera and Corinna share their travel diary.

The first day began early, with a 4am arrival at Kilimanjaro Airport. Our guide Modi welcomed us warmly in front of the airport, and we went directly on a short but very adventurous trip to the lodge in Arusha. Here Modi was able to prove that he really knows how to drive a 4x4, because the road in front of our lodge was dug up and flooded after heavy rainfall. We are now thoroughly convinced of his driving skills and are looking forward to the next days!

After a few hours sleep and a breakfast, we went into the centre with Modi and Mathias (the owner of the lodge). We were able to get first impressions of a market and try some culinary specialities. 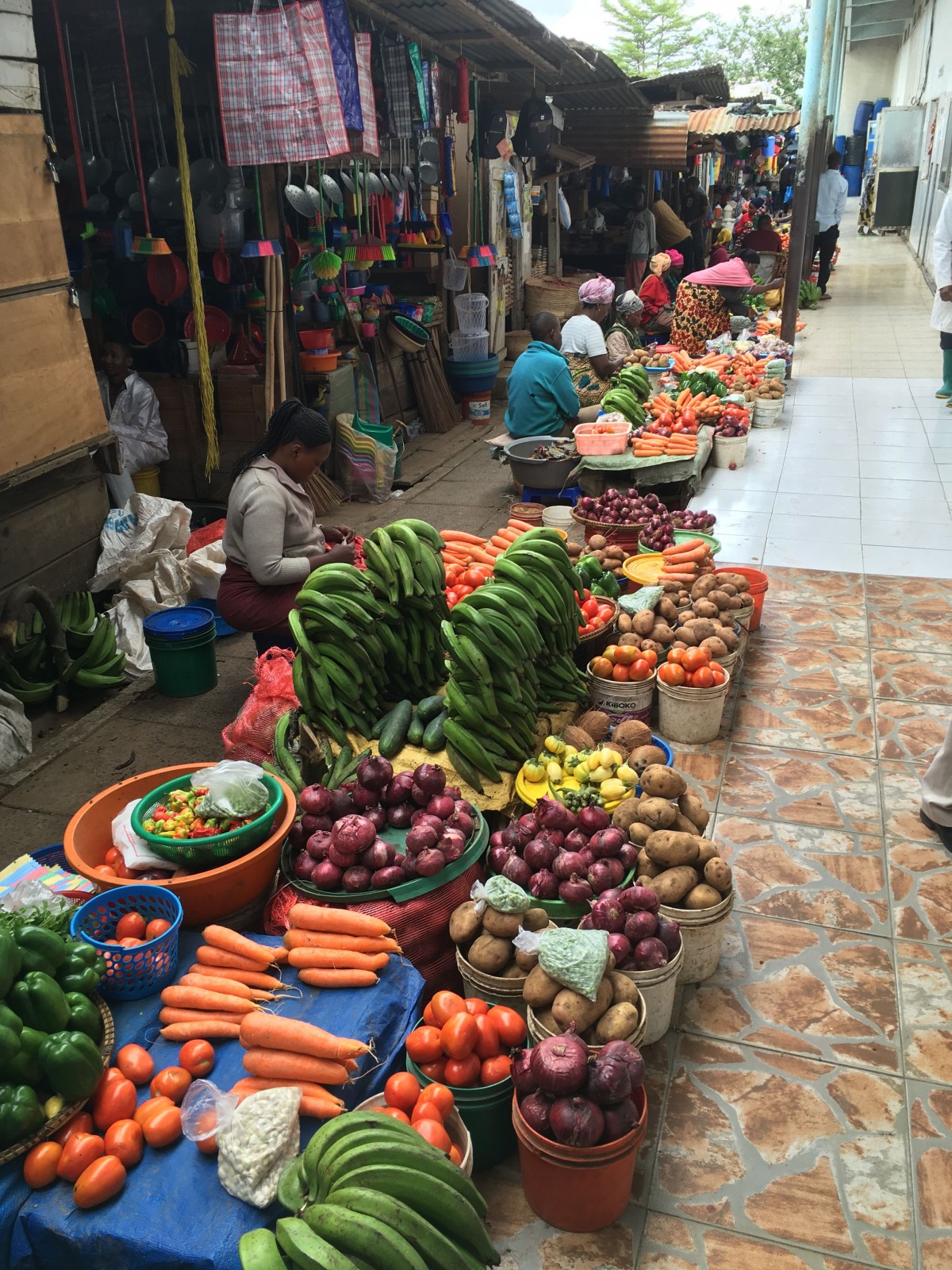 Today we went through the "Masai-Land" towards Tarangire National Park.

On the way not only did we see countless Masai with their herds of cows, but we also learned a lot about their culture and traditions. One thing we were shown was how precious and valuable water is for all living beings. While we only have to turn on the tap, many people walk for miles to draw water from a well and then carry it home. Such a journey influences how you think about ordinary things.

Arriving in Tarangire National Park we were immediately surprised by the variety of animals. Zebras, wildebeest, wild boars, dik-diks, monkeys and many more were cavorting at the first watering hole. Later we also saw herds of buffalo and elephants, giraffes, a leopard with their cub and even a "flirting" pair of lions! As the lions walked right past our jeep, the adrenaline rose... an indescribable feeling!

It will be hard to beat this day, but we are curious as to what the next day has in store. 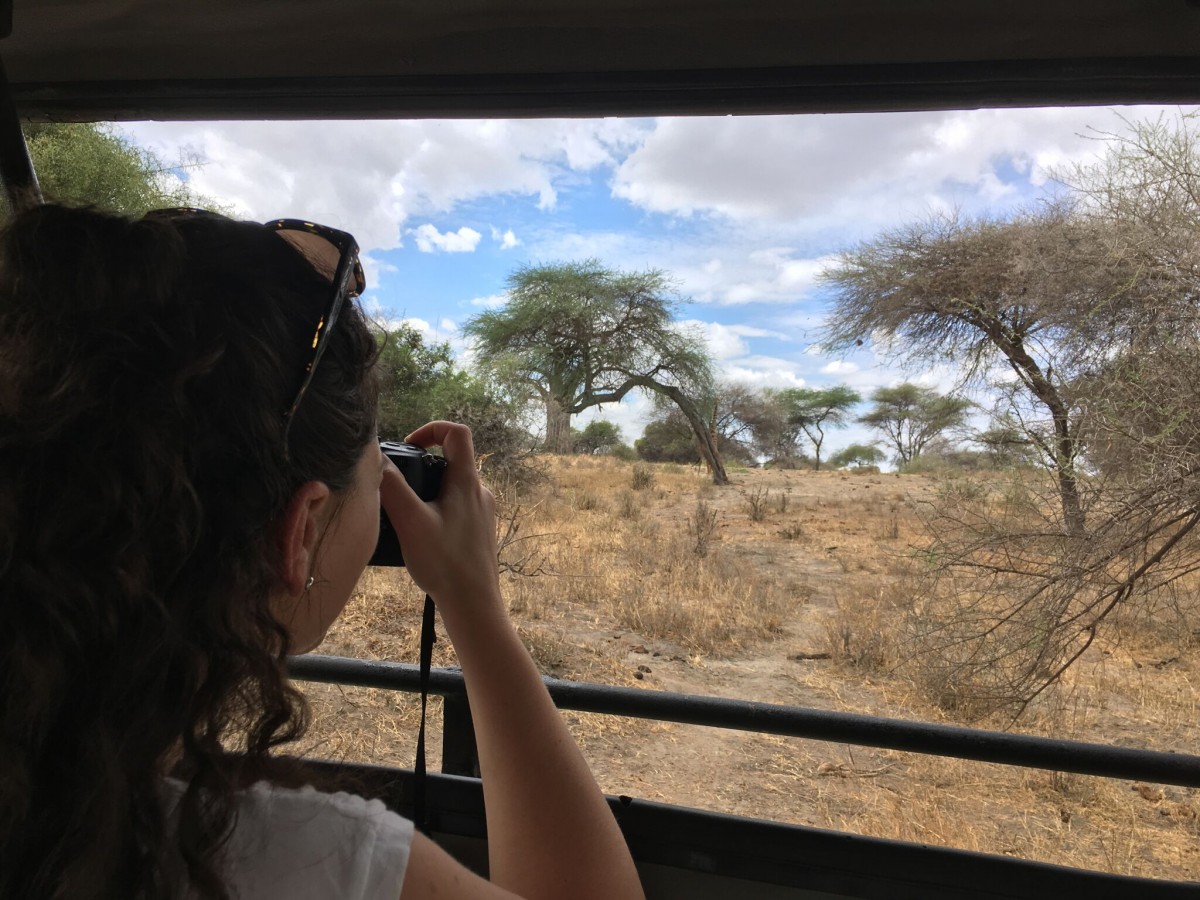 Hard to believe, but sadly the third day is almost over.  We are sitting in the bar with a Kilimanjaro beer, chatting with the bartender and reviewing the day.

Today we were in Lake Manyara National Park. On the two hour drive through small villages, we were given further insight into the hard everyday life of the local population. Often water canisters have to be transported for miles on bicycles, carts or even just on foot, carried on their heads.

Arriving at the national park, we were greeted in the first few metres by a gigantic elephant family crossing the road before us. It was an incredible feeling to face these huge creatures. Besides the elephants, we also saw giraffes, a lioness, many different monkeys, zebras, buffalos and lots of other animals. Another highlight of the day was Lake Manyara and its shoals of flamingos.

Fortunately another safari is on the agenda - we both agree that we could go on forever.

At 7:30 in the morning we headed for Ngorongoro Crater. We were surprised by the shower of jungle-like vegetation, first driving outside onto the ridges of the crater before driving down the path through the centre of the crater. The panorama was stunningly beautiful! The landscape in the crater was mostly quite barren, which made it easy to spot the big animals. We both finally saw hippos for the first time. The crater must be a hippo paradise as they have gathered in every pond. But the Ngorongoro lions retreated that day and did not show up. Probably because it was just too cold for them... we were wrapped up ourselves and a bit surprised by the low temperatures in the crater.

We were happy to hear more about the culture and the landscape.

Today driving was mainly on the agenda.

We had to drive from Karatu towards Marangu and on the way we made a 2 hour stop in Mto wa Mbu. This is a village with 11,000 inhabitants from different tribes, very "multicultural" for Tanzania as usually the tribes stay amongst themselves in their villages.

The village is known for its huge banana plantations and woodcarvings. During a tour with a local banana farmer we learned a lot about the cultivation of the bananas, the different varieties (18!!!) and the life of the farmers. Banana beer is made from one type of banana. Of course, we had to try that right away: it needs getting used to but it's not bad! 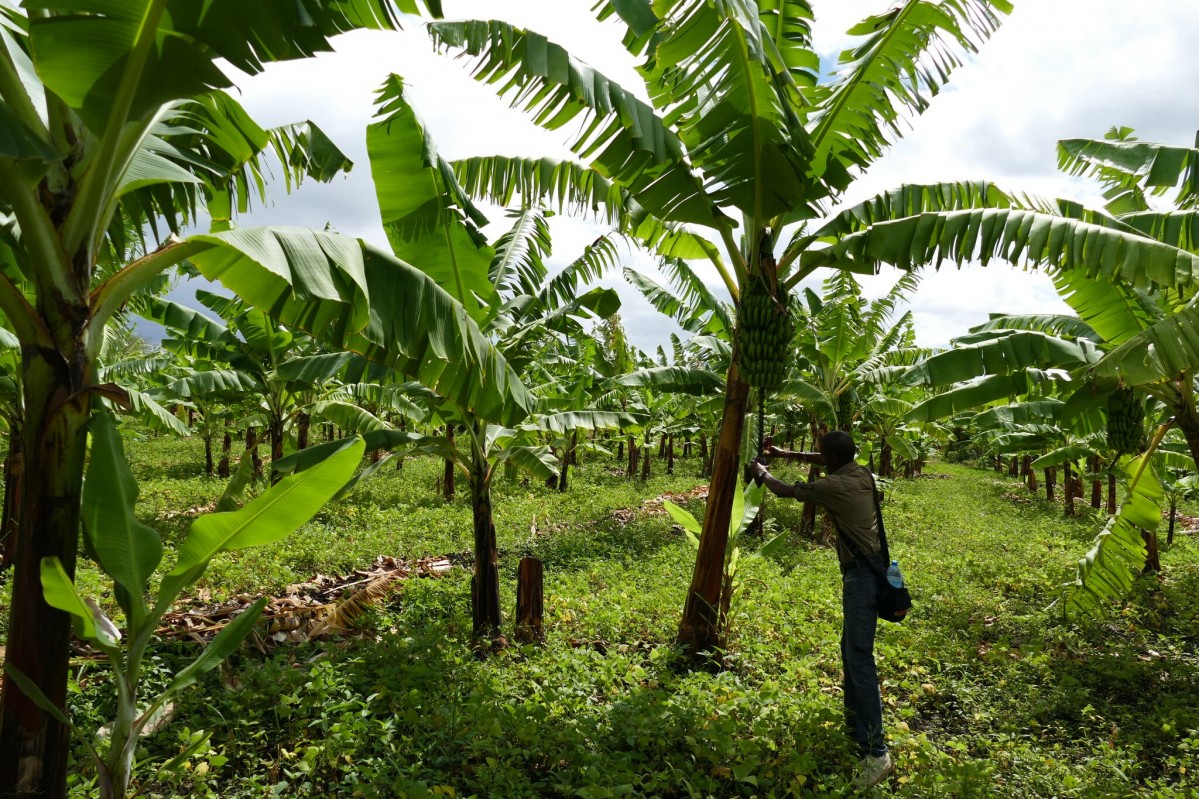 After breakfast we left for Lake Chala and checked into our camp. There we learned that 88 Dutch cyclists will stay there overnight with us, as they are participating in a charity event for the benefit of the Flying Doctors. After the arrival of the cyclists, the loneliness and silence at Lake Chala was over in one fell swoop, but we set off for a short hike shortly afterwards. After that we went for a kayak tour; and, as Lake Chala belongs half to Tanzania and half to Kenya, we paddled to Kenya in our kayaks.

Now this day too is sadly over. We are lying in our tent watching the stars in the Tanzanian night sky through the mosquito net. 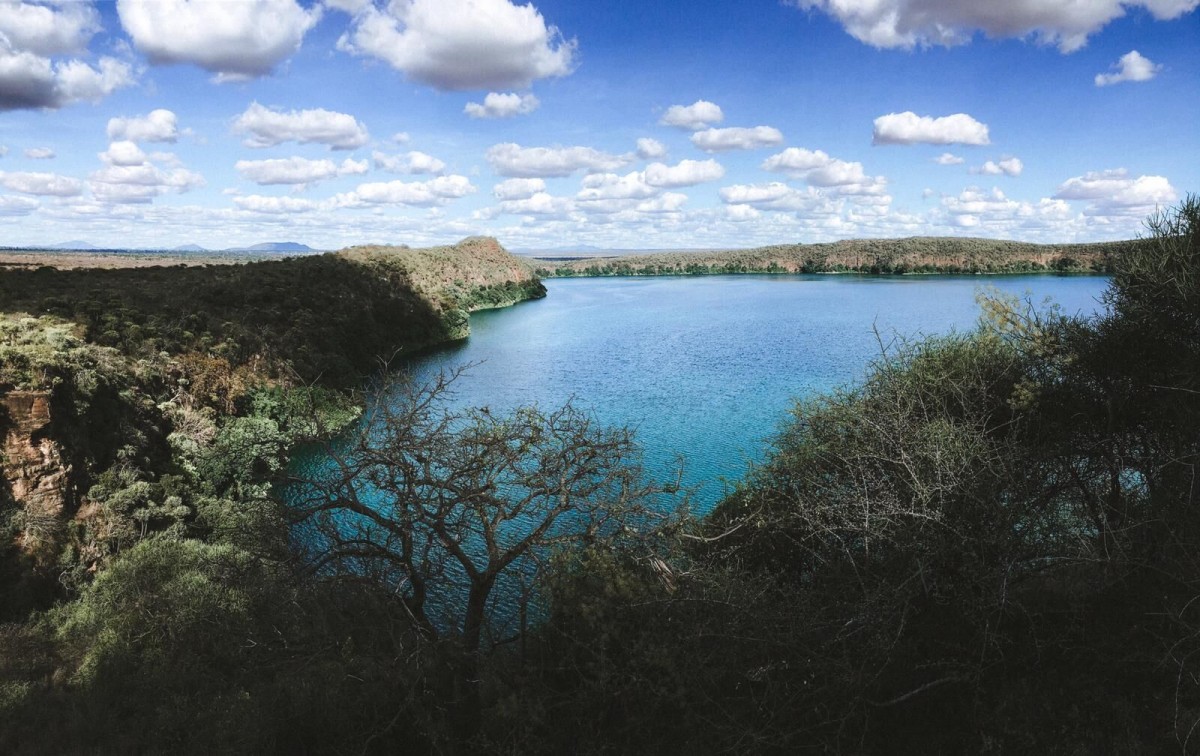 On the seventh day, we crawled out of our tent (after rather a short night) to watch the beautiful sunrise over Lake Challa.

After breakfast we set off to see the Treedom Project in Tarakea and get to know the local team.

We would be warmly welcomed by the whole crew.

Tommaso, the project manager, Alais, the CEO, and Paul, who is responsible for geotagging, showed us around and explained everything in detail. After a few hours all our questions were answered and we set off for a short hike in Kilimanjaro National Park.

In the late afternoon we went back to the project, because the seedlings were being loaded for distribution. All hands were needed and we were able to help with the loading. About 1,800 seedlings were packed onto the truck; among them avocados, oranges and papaya seedlings.

Later in the evening, sweaty and covered in dirt but very happy, we drove to our lodge. We sat with a beer, asking Tommaso all our questions about his work at Treedom - but we couldn't stay up too late, because the next morning at 7am we were going to the tree distribution! 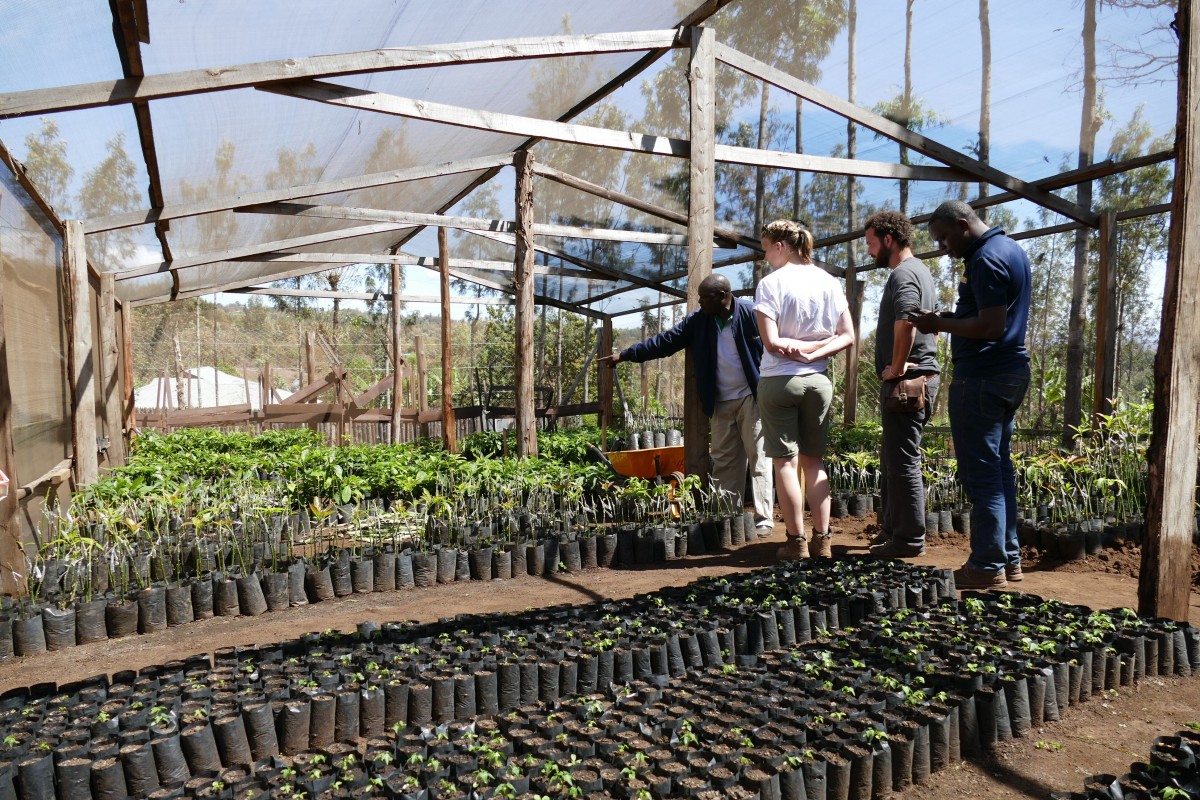 On our "departure day" we were actually allowed to take part in the distribution of the seedlings to the local farmers. This takes place only rarely, and is always "the busiest day on the calendar". The distribution took place in the neighbouring community, with the seedlings being distributed to 19 farmers and their families.

We were welcomed into the community very hospitably and got our second breakfast! The farmer's wives, who distributed the food, served ginger coffee, chai tea and some local specialties with fried bananas, jam and fresh papaya and avocado.

First, in the official meeting, the farmers were informed about their rights and duties. Every farmer who cooperates with Treedom must sign a contract regulating the cooperation. This contract is primarily intended to guarantee the care of the trees for at least ten years.

Afterwards, the necessary care of the plants was explained again in detail, then it was recorded exactly which farmer gets how many seedlings. After a few hours the distribution was over and we could observe how the happy farmers carried their plants home (mostly in a box balancing on their heads). For us it was a really nice morning and a perfect end to our trip - we got to know many of the farmers and saw in person how the concept of Treedom works.