Before the Flood, the new documentary directed by Leonardo DiCaprio

How can we forget the Oscar achieved after so many years of career and as much nominations? It was the end of February when Leonardo DiCaprio won his first statuette as Best Actor in 'The Revenant'.  And how to forget his acceptance speech? A thanks to his parents without whom nothing would have been possible, to old friends and then the thought becomes invariably green, underlining its commitment to the preservation of the planet: "In 2015 we had to go to the South Pole to find the snow. Climate change is the greatest threat of our times and we must work together to stop it, stopping delay. I don't take this Oscar for granted, like I don't take this planet for granted! "

The hearts of the fans start to beat even more for the star from the sensitive heart and with a strong passion towards Earth. The issues of sustainability and environmental protection are also the protagonists of his last work for the big-screen: the documentary 'Before the Flood', directed by DiCaprio and Fisher Stevens and produced by Martin Scorsese, had its world premier at the Toronto International Film Festival last September. 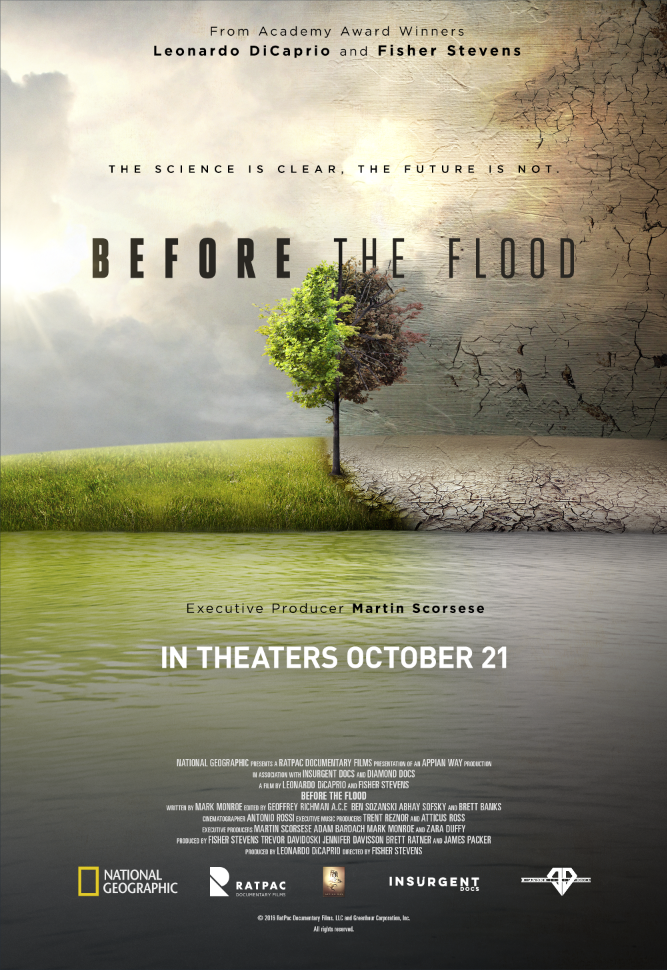 It all started in September 2014, when DiCaprio was appointed Ambassador of Peace by the United Nations. Thus the project that led the actor and director to travel from Miami to Beijing, passing through Indonesia and Canada was born, showing the dangers of climate changes. Oscar-winning lends his face and name to the cause, giving the public a titanic work to find an answer to the question that gripped him: "I want to know how far we have gone and what we can do to stop climate change."

The journey is spaced out by meetings with prominent personalities, scientists, activists and politicians, called to face directly the problem, trying to raise public awareness. The meetings ranging from President Barack Obama to Pope Francis, from Bill Clinton to John Kerry. His hope is to convince the so-called deniers, fringe still very rooted in the United States, who deny that climate change is due to human behavior. The ultimate goal is not to frighten the spectators or to resubmit the well-known statistics and numbers, but to focus on what can and must be done immediately to leave a liveable Earth to future generations. The concluding message is just a "everything is up to us."

The film will be released in a limited number of cinemas in the United States from today, October 21st, and on October 31st it will debut on National Geographic Channel in 171 countries and 45 languages.