Probably some of you have already seen a video on Facebook located in Tokyo, where a friendly and super technological building 'swallows up' pedestrian’s bikes, parks them methodically and at the end of the day, it returns them back to their owners. All this at £14 per month. Personally, I bet that many of you have been fascinated by the stylish and strange lift and they thought: "I’d like to have one in my hometown, it would solve a couple of my everyday problems."

And…slowly dreams will come true, as more and more cities are equipping themselves to have one, or more than one, as crowed parked bicycles become famous in the streets of Amsterdam, Copenhagen or London. The 'bike towers' come from Germany and their real name is Radhaus cause of a pun on the German word Rad, which means bicycle, and Rathaus, which means city hall. They are managed by Cardok Company and their director Nick Child who is preparing to land in the UK. The towers can be assembled within 2-3 weeks, are 10.5 metres high but occupy a relatively small surface area of 55 square metres and solve one of the main fears of those who every morning choose a green way to move around: the theft of their own bicycle. For £2-£3 a day, the towers can hold up to 120 bikes and can be accessed by 12 cyclists at the same time. 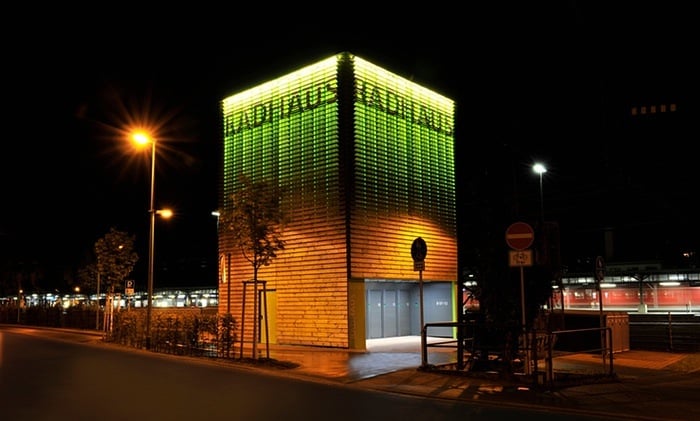 When Nick Child explains the reasons why he created Radhaus, he speaks firmly, showing a particular attention to the world around him, revealing how often the simplest things are also the most functional. "We need much more compact solutions" in order to stem problems of public order, security and personal serenity. What is surprising is that this kind of activities is mainly carried out by cities rather than private companies. Businessmenare not sure about the economical model. Will cyclists, who are used to free parking, be willing to pay to park their bikes? Child is optimistic, predicting that the Radhaus will break even after five to 10 years.