"To work with the energies of nature, but also of our society, to gather around the boat the experience of companies, laboratories, startups and institutions." This is the aspiration of Victorien Erussard, President and Captain of Energy Observer, the first hydrogen boat in the world that is preparing to set sail for a trip to 101 stations around the world.

The circumnavigation with zero emissions, in addition to promoting the global transition to renewable energy, will also act as an itinerant research laboratory. A great symbolic initiative for the maritime transport sector that, according to statistics of the International Maritime Organization, emits about 1 billion tons of CO2 per year. With these numbers, the sector is currently responsible for about 2.5% of global emissions of greenhouse gases, with a growing trend that is likely to be between 50% and 250% by 2050.

Thirty meters long, eighteen meters large and with a total weight of 30 tons for a boat that can move at a speed between 8 and 10 knots, about 15 km/h, in a fully autonomous manner and without emitting greenhouse gases. The Energy Observer will in fact be equipped with devices for the exploitation of a strategic mix of renewable energy sources: 130 square meters of bi-facial photovoltaic panels and two vertical-axis wind turbines feed on fuel cells, with hydrogen produced on board with a desalination process. 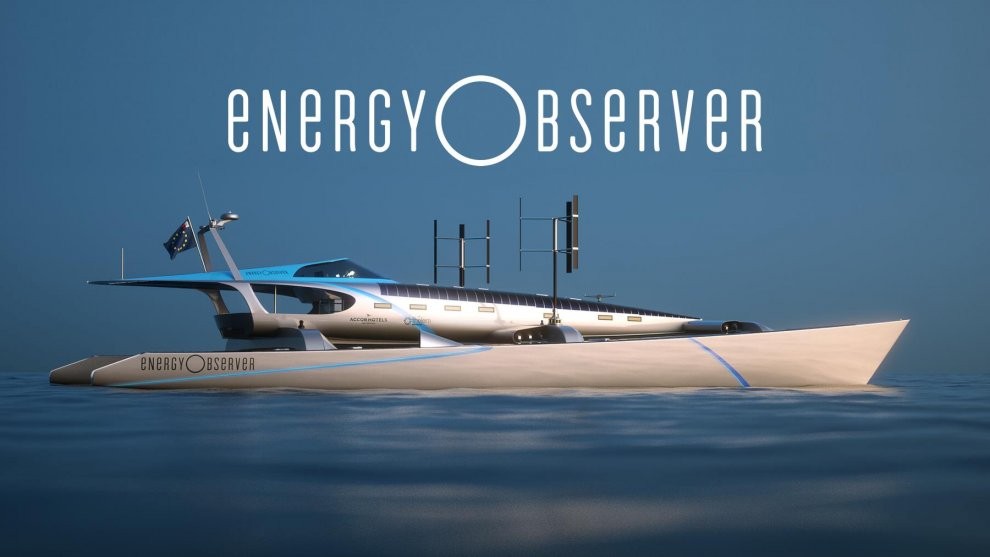 This project is also supported by Nations Educational, Scientific and Cultural Organization (UNESCO) because of the catamaran route, that will touch the coastal capital, historic ports and marine nature reserves in the Mediterranean and Northern Europe between 2017 and 2019, America in 2020, Asia and Oceania in 2021, and ends in Africa in 2022. A route without any 'carbon footprint': an exception, everyday less rare fortunately, in the world of transport. And all thanks to advances in the exploitation of the potential of hydrogen as a technological solution to minimal impact on the climate.

A current topic, also central in the recent World Economic Forum in Davos. On this occasion 13 leading companies in the energy sector for global transport, such as Total, Toyota and BMW, have collaborated in the creation of the first World Council for Hydrogen. It just has to set sails and go towards the future!