Mongolia: Gobi desert in the south, cold and mountainous regions in the north, steppes, rivers, ancient traditions and nomadic culture. One of those mythical and remote corners of the planet that comes to mind of all as soon as its name is evoked. But to describe the current situation of the East Asian state we have to rewind the tape and start again.

Mongolia: desertification, subsoil pollution, loss of ancient cultures, 2.000 rivers and 850 lakes disappeared, reduction of nomadic culture. This gradual but inexorable process takes hold in the mid-twentieth century, when the big mining companies, in particular the Chinese Puraam and Canadian Centerra Gold, began to dig for gold in 168 hectares of land along the Selenga, the largest river in the country. To separate gold from the rocks was used from the beginning arsenic, which finished first into land and then into water sources, polluting soil and rivers. Ultimate consequence was the widespread deaths among the herds symbol of the Mongolian nomadic culture.

Today 25% of the land has become desert, while the remaining 75% is at risk of desertification. Yet, the Mongolia of nowadays, with the colors of the desert, meets and evokes the green Mongolia of the beginning of 1900 thanks to the photographic work realized by Daesung Lee. He’s South Korean and the name of his project is Futuristic Archaeology. Daesung has photographed some of the great desertified areas of Mongolia, placing within each scene a different image printed on a large billboard - in correspondence with the horizon of the landscape – of the same area before the beginning of the process of desertification. In this way the photographed landscapes become a kind of limbo, somewhere between the current situation and an ideal exposure in the future of what was an old tradition.

The result allows us to speak about the problem describing it in an immediate way, impact and at the same time poetic way, capturing well the precariousness of nomadic life. With this work Daesung won the Happiness Award and it will be exposed in the On the Move Festival of Travel Photography scheduled the 14th July in Cortona. To realized these photos he was inspired by dioramas (literally, environments inside small-boxes) dating back to the nineteenth century and still preserved in natural history museums that tell the ancient Mongolian tradition that will soon disappear – thus, the name of his work, Futuristic Archaeology, it’s not fortuitous. 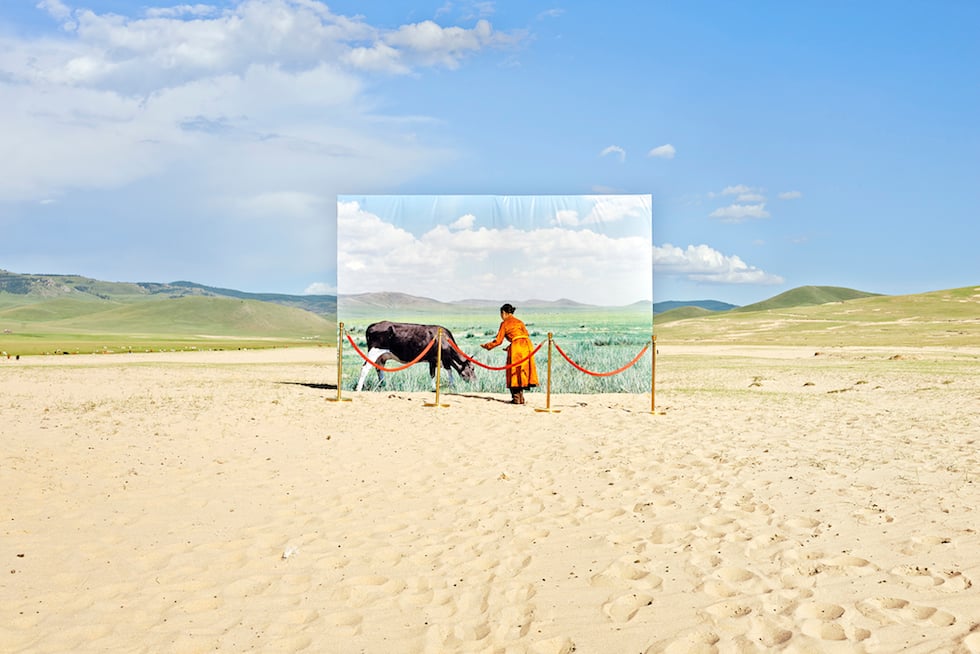 The increasingly alarming climate changes that are affecting the Mongolian territory also affect the traditional lifestyle that population, the majority still nomadic, has for generations risking the loss of all the knowledge that has been passed down over time. What will remain?, asks the photographer. The answer ironically sad is: exhibitions, photos and dioramas conceived by those governments that have destroyed them.