If you are thinking of changing your home you should considering homes I'm going to tell you about. Popped up around the world, they are able to generate more energy than they use, making them potential resellers of the unused and an excellent and practical example of the sustainability of renewable energies over fossil fuel sources. In addition, for the owners the annoying and heavy electric bills to be paid could soon become only a distant reminder.

Let’s start with our neighbors: in Freiburg in Germany, the Heliotrope House by Ralph Disch rotates 180 degrees to follow the sun's path in the sky and maximize solar panel efficiency generating up to five times the energy consumed. In addition, a 6.6 kWH rooftop solar array helps the home achieve plus-energy status. To complete the work a rainwater recycling system and a composting toilet. Always in Germany, the Werneer Sobek Group designed the B10 Aktivhaus: it produces enough clean energy to power not only itself and two electric cars, but also the house next door. The rooftop photovoltaic system produces about 8,300 kWh of solar energy per year.

We stay in Europe, but let's move north to Larvik in Norway. Here, Snøhetta’s ZEB Pilot House - a 200-square-foot family home - is fueled by solar and geothermal energy and produces surplus energy to power an electric car year-round. In Britain, Solcer House - designed by Professor Phil Jones and his team of the Cardiff University - sucks in enough solar energy that it can return excess energy to the grid eight months out of the year. In Lystrup, Denmark, Home For Life by AART Architects, is an impressive contemporary home filled with natural light and strategically positioned to take in 50% of its winter heating from passive solar means. The ultra-efficient home includes a photovoltaic system, a solar hot water system, heat pump, energy-optimized windows and an automatic ventilation system. 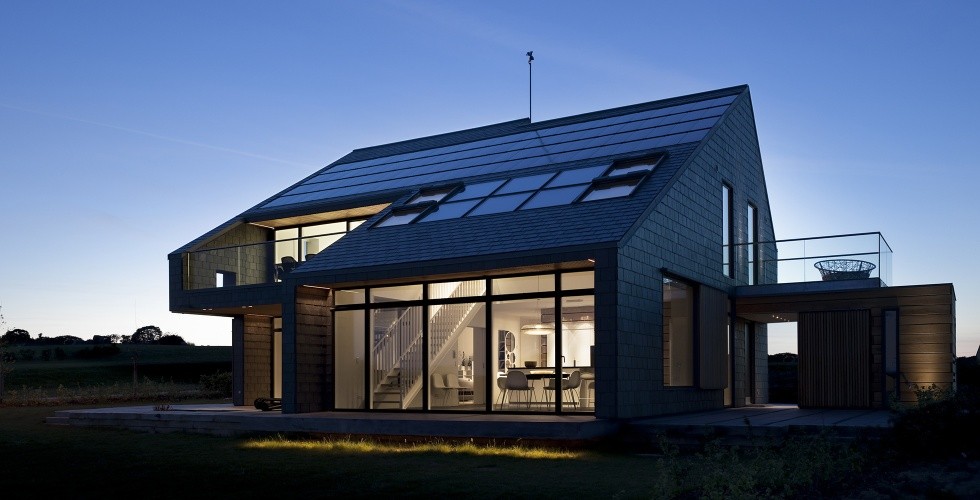 Beyond the Atlantic Ocean, in Oregon, Nathan Good Architect has realized Cannon Beach Residence, which offers more than just a surplus of renewable energy. The green house also has spectacular ocean view and generates energy from a combination of photovoltaic, geothermal energy, heat recovery ventilators and high-efficiency heat pump. Still in America, but in Boston, the Interface Studio Architects, designed Roxbury E +, LEED Platinum-certified homes are each topped with 39 solar panels that can produce around 10,000 kilowatts a year.

Finally, in Australia, ArchiBlox's Carbon Positive House was presented as the first carbon-positive prefab house. The double glazed facade allows you to store large amounts of natural light, while the interior is covered with durable, energetic and non-toxic materials.