The World Economic Forum’s annual meeting in Davos is over. From 17th to 20th January, policy makers, managers, stakeholders and major corporations focused on the “Responsive and Responsible Leadership” theme. The Global Risks Report 2017 has been a starting point to highlight the most significant long-term risks worldwide, pointing the way in strengthening the global development. According to 750 experts and 30 global risks, together with rising inequality and social polarization, environmental threats have risen the top. As a matter of fact, extreme weather events, involuntary migrations and major natural catastrophes are considered the most prominent global risks. The Cop22 meeting and the ratification of the Paris Agreement officially signed also by US and China represent an historic turning point, but leaders need to take action to solve critical and more likely challenges.

In this scenario, the Ellen MacArthur Foundation and McKinsey & Co. pointed out the increasing impacts of plastic on wildlife and ecosystems and urged action to tackle the current environmental crisis. Launched during the forum, “The New Plastics Economy: Catalysing action” report suggests a plan for the global plastics industry to design better packaging, increase recycling rates, and introduce new models for making better use of packaging. As stated in the last report published in 2016 by the Foundation, plastic production has surged over the past 50 years, from 15 million tonnes in 1964 to 311 million tonnes in 2014, and is expected to double again over the next 20 years. These alarming data explain the urgency and necessity of shaping a new comprehensive strategy for plastics industry, in order to prevent the projection of more plastics than fish (by weight) in our oceans by 2050. Novamont, Danone, Coca-Cola, Unilever, Mars Incorporated, Amcor and Veolia have jointed the New Plastics Economy initiative as core partners, collaborating with more than 40 stakeholders led by the Ellen MacArthur Foundation. 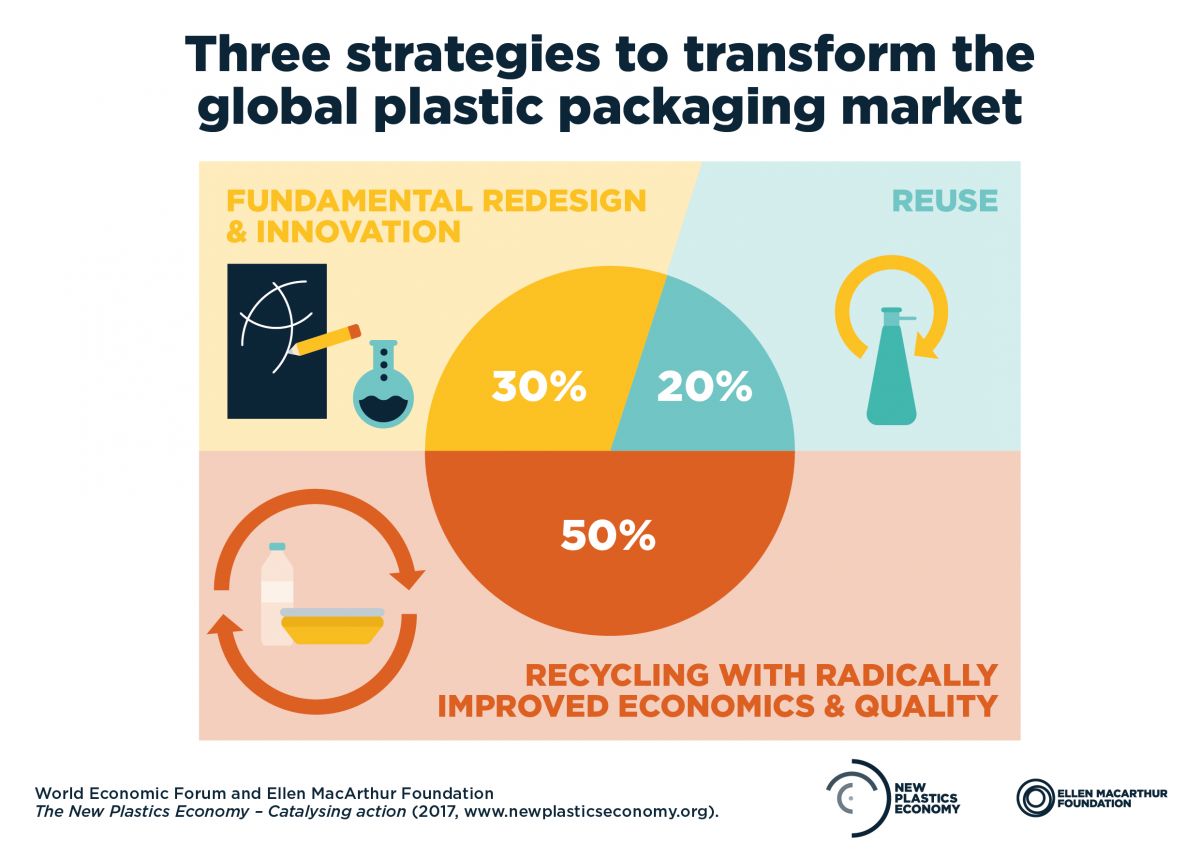 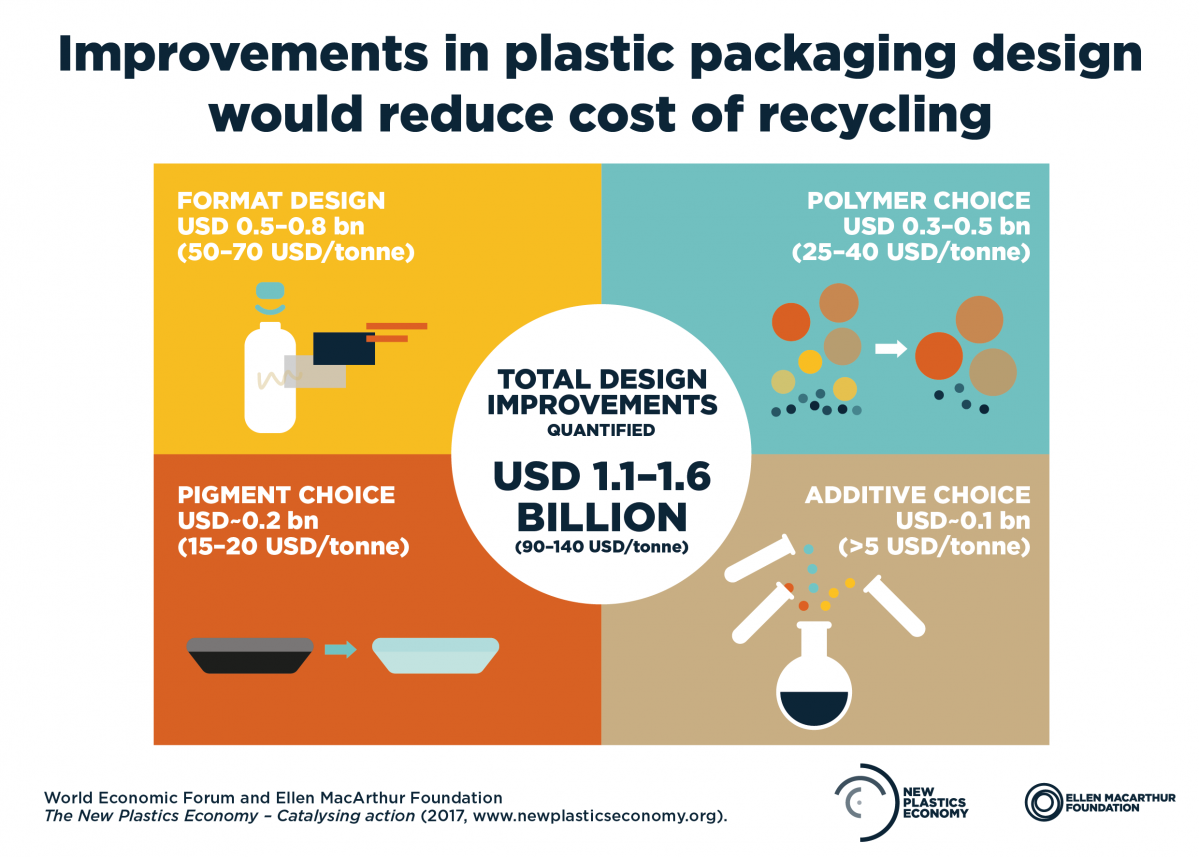 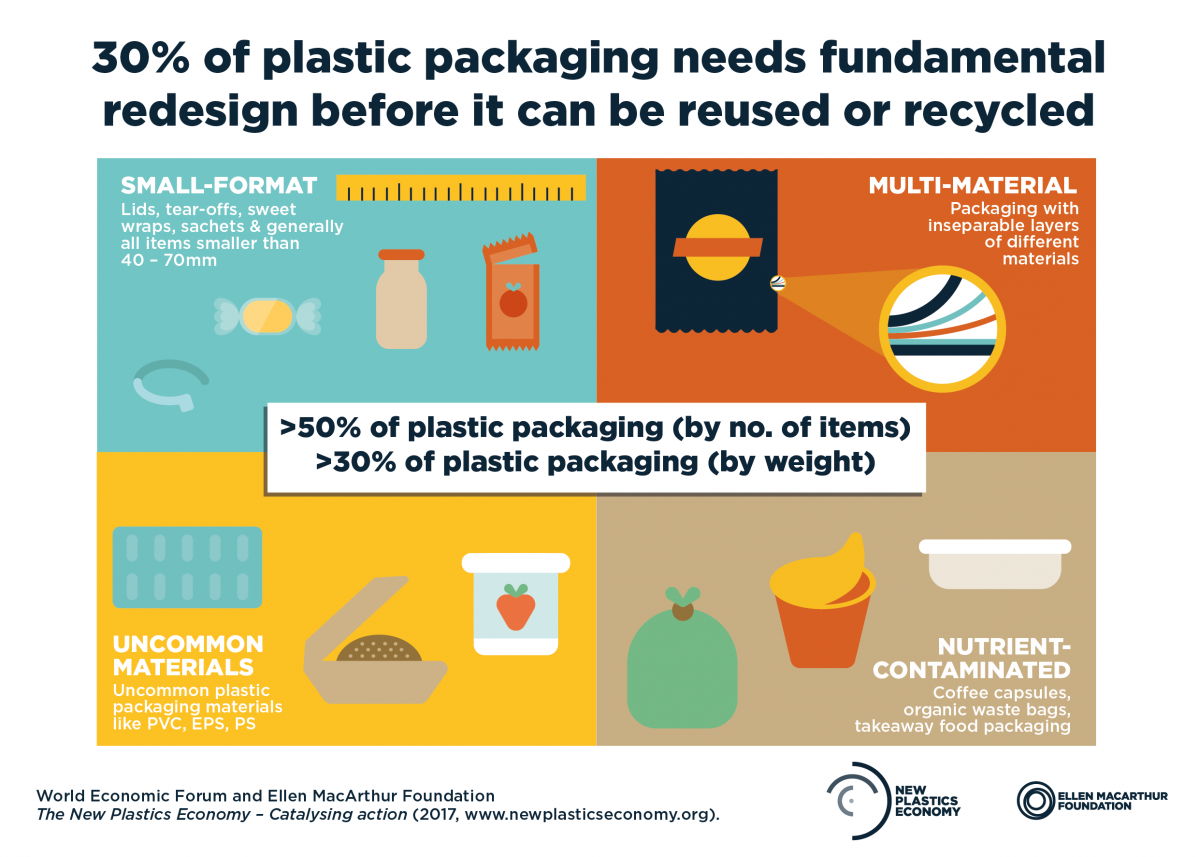 The plan suggests a set of actions to drive the transition, based on three decisive strategies and on the concept of a circular economy, to boost the reuse and recycle of plastic packaging up to 70%, from today's recycling rate of just 14%. According to the research, 20% of plastic packaging could be reused, by refilling bottles, avoiding single-use bags and choosing among sustainable materials, for example. A further 50% could be recycled instead of becoming waste, recognizing the value of it. The remaining 30% (by weight), the equivalent of 10 billion garbage bags per year destined to landfill or incineration, requires a fundamental redesign plan. As pointed out by the study, technology and material innovation play a significant role in terms of sustainability.