The fail of Amazon and Netflix according to Greenpeace report

Greenpeace plays as the Miss Rottermeier of the web. She scolds who don’t take the commitment to use 100% energy from renewable sources, pretends the maximum transparency in energy efficiency and resource consumption and demands the development of a strategy to increase the supply of energy from renewable sources. Moreover, merits and scolds take place widely and last was only a few days ago...

On January 10th, Greenpeace published the report 'Clicking Clean: Who is Winning the Race to Build a Green Internet?' in which analyzed the energy footprint of big data centers and about 70 websites and popular applications. At the top of the ranking, doing a good job there are Apple, Google and Facebook: always in the forefront in the use of clean energy and continuous improvement. But other two majors don’t succeed: Amazon and Netflix, too much late and not only. According to Greenpeace’s report, despite the announcements, Jeff Bezos’ company still maintains customers unaware on its energy decisions. Such reticence makes Greenpeace worried, especially considering that the company is expanding its activities in the geographical areas in which green energies are not used. 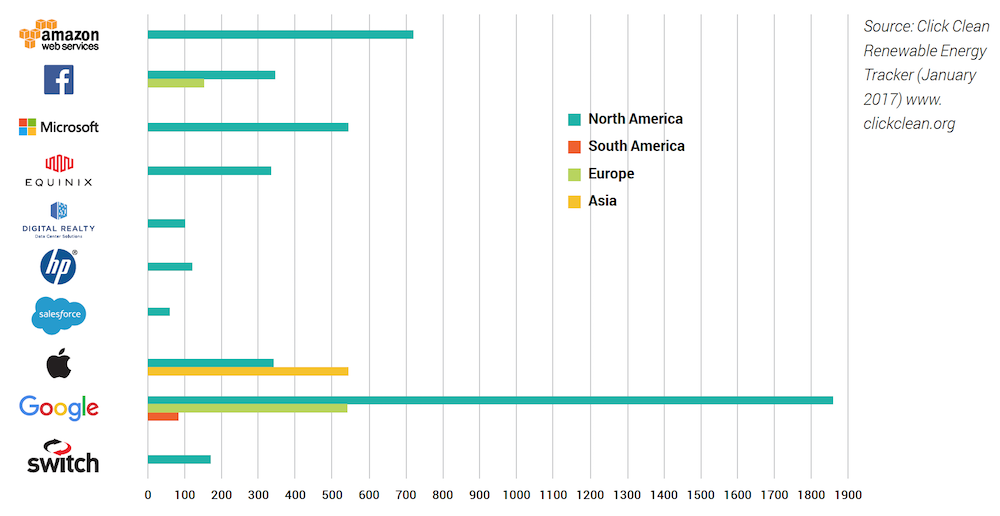 Perhaps the situation is even more serious for Netflix, one of the most important streaming platform in the world, with an imprint energy that affects one-third of North America’s internet traffic and which contributes significantly to the data demand for streaming video. The report shows that in 2015 Netflix had announced plans to completely offset its CO2 emissions. Yet none of this has been done. The company has just bought credits offsetting emissions, without increasing investment in green.

But why has Greenpeace turned the attention to companies belonging to the IT sector? To find it out, just look at the trend of recent years and at the importance of their consumption. In 2012, the IT industry has been using the 7% of global electricity, a figure increasing since in 2017 is expected to exceed 12%. In addition, in 2015 streaming video accounted the 63% of total Internet traffic, and is expected to reach 80% share in 2020.

But the severity of Miss Rottermeier hides an important lesson concerning both the environmental future and the ethics of these companies. Being a successful giant company with an enviable business means – also and always – a big responsibility. Like Apple, Facebook and Google, Netflix is ​​one of the greatest actors of the Internet and plays a key role in deciding how this energy sector has to be fed with. The choice of renewable energy and not the fossil fuel ones becomes a corporate obligation, to become even more an example and model.