It is probably the smallest and the most eco-friendly coffee cart in the world. It has two wheels, you bring it from one part of town to the other while wheeling, it runs on solar and wind power, and not only it does not pollute but actually cleans the surrounding air through a purifier.

It's called Coffee Cart-On-A-Bike and it was created by the Swedish startup Wheelys. The mobile coffee bar is not a one-off: the company has already realized three models, one more sustainable than the other, and this time it really outdone itself because the coffee cart is powered by renewable energy, cleans the air and also try to eliminate as much as waste as possible. 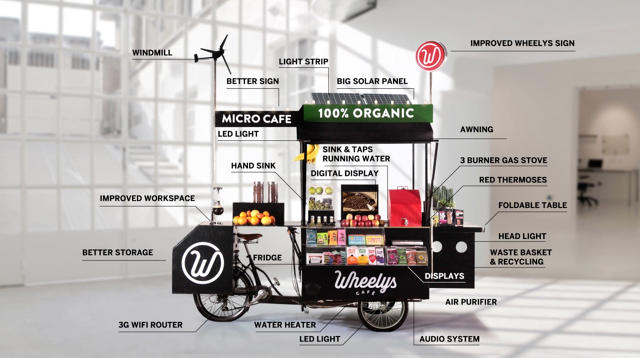 The coffee grounds indeed are packaged along with some flower seeds and given to customers as fertilizers for plants because they have important nutritional properties. The goal is to challenge the giants like Starbucks and propose a new franchise model that allows everyone to invest, even the most young entrepreneurs who can not afford the startup costs of a permanent store. Wheelys removes the biggest production cost (rent) and sells only the most profitable product (takeaway coffee) in the most environmentally friendly way and in the best location.

With the motto 'Changing the world one pedal at a time', the company has already sold 315 mobile cafes in 51 countries in less than a year, coming to a step from Starbucks (spread in 60 countries) and promises as much as $ 1,000 in a single day and a return on investment in a short time.