The new face of Hamburg, at the edge of urban regeneration and innovative projects

Sustainable mobility, cost reduction and energy efficiency are the key factors of the sustainable development implemented in Hamburg. Frontrunner for having banned single-serve coffee pods and plastic water bottles from council buildings, the Hanseatic city awarded as the European Green Capital in 2011, is now dealing with a new revolutionary project, named “Green Network”. The plan aims to create a city cycle track and has a twofold objective, namely: drastic reduction in the number of cars from its centre over the next 20 years and absorption of CO2 emissions. According to Angelika Fritsch, a spokeswoman for the city's department of urban planning and the environment “in 15 to 20 years it will be possible to explore the city exclusively by bike or on foot”, thanks to the new green network that connects parks, playgrounds, gardens and recreational areas.

Fostering urban regeneration and promoting ecological solution represents the new face of the German city plan. Indeed, in order to combat climate change, cities must change their energy sources and turn the concept of a standard district plan. This ambitious vision is shared by the new quartier HafenCity project. Besides sea rising level and high risk of flood events, HafenCity is located on the Elbe river islands, only around five meters above sea level. The idea of living with, rather than fighting extreme weather events is the turning point. Almost 6.000 homes for approximately 14.000 residents, stand on artificial bases eight meters above sea level, out of reach of the most extreme flooding. Roads and bridges are also being built above the flood-line at least almost 8 meters above sea level. This visionary thinking ensures the normal traffic flow even during a storm surge and designs the downtown like a protective barrier from the rising sea. What’s more is the supply of energy in HafenCity, considered both innovative and sustainable. Geothermal energy and solar thermal energy meet heating and air conditioning demands. Moreover, woody biomass-fired combuster, a biomethane fuel cell and a heat pump will be deployed, completing the energy mix supply. Since the development of the neighborhood will continue until 2020 and beyond, flexibility and more renewable solutions are the key message for a successful sustainable energy future. The architecture itself reflects the variation in the quarter: a mix of residential and office spaces, parks and plazas, a great variety of firms of architects for buildings and apartments and a wide embankment promenade with a total length of almost 10 km will complete the project, allowing pedestrians to get around away from the roads. The estimate turnover is evaluated around 8.5 billion of private investment, 2.4 billion of public investment, mostly financed from special assets fund sales of plots in HafenCity (around 1.5 billion).

The energy shift and the renovation of existing buildings represent also the guiding theme of the International Building Exhibition (IBA) Hamburg projects, which has changed the face of the Elbe Islands and Harburg Upriver Port. Indeed, the Wilhelmsburg’s former air raid bunker has been transformed into an energy generator building, supplying renewable energy to the quartier. In addition, it has become a hub for exhibition and events, giving visitors the opportunity to enjoy the view over the city from the rooftop café. The Energy Bunker is composed by a combination of various renewables energy sources, which include a solar thermal unit, photovoltaic modules, a co-generation unit driven by biogas, industrial waste heat collection, wood chips burned to produce heat. Condensing boilers powered by natural gas complete the system. It produce 22,500 MWh of thermal energy, enough to supply a surrounding area of 0.5 square kilometers with 3,000 households. Furthermore, the units produce almost 3,000 MWh of electrical energy, which provides the bunker itself with electricity. The rest is fed into the public grid. 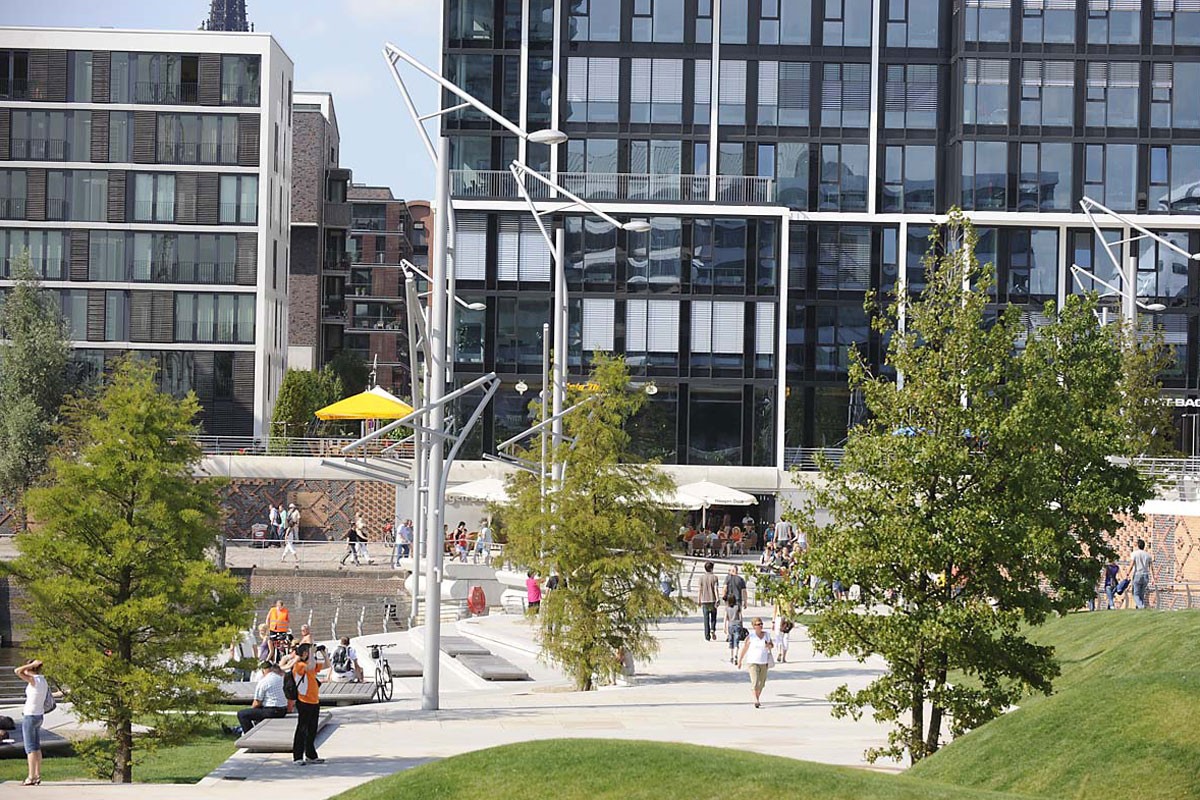 Similarly, the Georgswerder landfill site has been transformed into a renewable energy hill. During the World War II, the landfill area in north-eastern Wilhelmsburg was piled up with industrial and domestic waste and was officially closed down in 1979. In 1983, due to highly toxic dioxins penetrations, the toxic dump was made safe and a vegetation layer was put on top, beginning the process to transform it into an energy hill. Nowadays, the project includes two wind turbines and a large photovoltaic unit. In addition, the inside of the hill continues to produce landfill gas with a high level of methane, due to the decomposition processes. For many years this has been systematically collected and supplied to the nearby company Aurubis AG, one of Europe’s largest copper smelters. In conclusion, a heat pump that uses the energy content of the groundwater supplies heating to the surrounding buildings and to the information center. Currently considered a popular landmark, in 2013 the Georgswerder Energy Hill welcomed 60,000 visitors, offering a pleasant place for events, workshops and contests.

The revolution starts from the inside. Cities and citizens establish new relationships. Cities need to be adapted to the energy shift. We have to rethink the way we produce energy and how to restore good environmental conditions of factory sites. This approach brings Germany closer to the target of 18% renewable energy by 2020.