Coffee in Africa and climate change

Coffee is one of the most valuable agricultural products in the world and an important export crop for many developing nations. This is especially the case in Africa, which exports around 20 percent of the world's coffee and has over 120 million people employed by coffee farming. Climate change could have an impact on these numbers, though—and it isn't clear yet how bad that impact will be.

If it weren't for the coffee, I'd have no identifiable personality whatsoever.
David Letterman

Coffee is one of the most valuable agricultural products in the world and an important export crop for many developing nations.

Coffee accounts for more than 80% of all African exports to the United States and it's a major export commodity in Kenya, Ethiopia, Uganda and Tanzania.
Coffee is an important source of income for many people across Africa, who depend on its cultivation as a means to survive. The industry also helps stimulate local economies by providing jobs at processing facilities and other businesses that support farming activities (such as transportation).

For coffee cultivation, temperature and rainfall are the most important climatic factors.

The ideal conditions for growing coffee trees are a temperature range of 12 to 24 degrees Celsius and an annual rainfall between 1,500 and 2,000 millimetres (1-2 inches). The best climates for producing high-quality Arabica beans occur within 15 degrees of the equator - which lies in an area stretching from Ethiopia to South Sudan - or at altitudes above 2,000 metres (6,560 feet).

An increase in temperature causes the flowering period to begin earlier, leading to lower yields and shorter growing seasons for Arabica coffee trees.

Arabica coffee trees are more sensitive to temperature changes than other species. They flower and produce fruit during the rainy season, which lasts from November to March in East Africa. When temperatures start rising, flowering begins earlier in the season and this means that these trees are producing fruit at a time when there is less rainfall. This increases the risk of drought stress, which makes coffee plants more vulnerable to fungal diseases like coffee rust.

While climate change affects all parts of the world differently, it will likely have a negative impact on African farmers who currently grow the Arabica coffee beans used in your morning cup of joe. 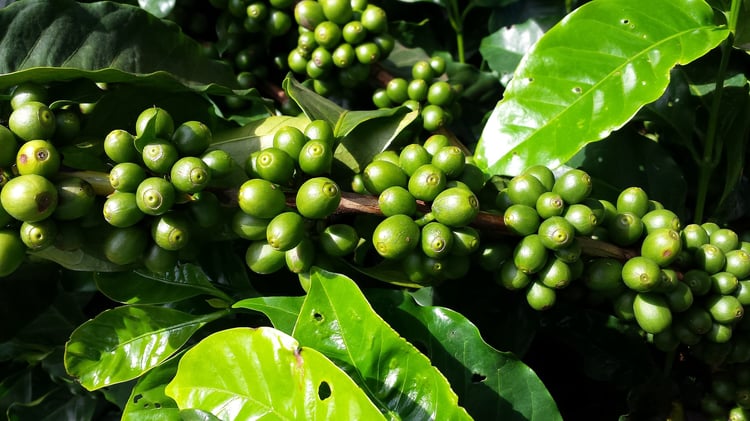 Ethiopia is already experiencing an extended drought cycle and it is expected to continue.

Ethiopians have already begun taking steps to start growing other types of crops instead of coffee. Ethiopia is the largest producer of Arabica beans, accounting for about 60% of the world's supply. However, a study published in Science Advances found that climate change could cause Ethiopia's rainfall to decrease by as much as 15%. This would make growing Arabica beans difficult without irrigation systems or more expensive processing methods than they currently use, which would cause prices to rise significantly.

Ethiopia has started implementing new strategies such as moving away from traditional farming practices (such as slash-and-burn) and using soil amendments like manure instead so that their soils are less vulnerable to erosion when there are droughts. They also plan on introducing drought-resistant plant varieties such as teff grasses; these grasses can survive longer dry periods than most crops do because they store more carbon in their roots during wet periods which allows them access more water later when droughts occur again during dry seasons.

Climate change may not have the same impact across all countries and regions that grow coffee.

Coffee is grown and harvested all over the world. Different countries and regions will be affected differently by climate change, depending on their ability to adapt. Climate models suggest that higher temperatures in many coffee-growing regions will lead to lower yields in these areas, because of increased heat stress on plants and reduced soil fertility. Coffee farmers could adapt by planting new varieties of coffee that are more resilient to higher temperatures; by improving irrigation systems; or even converting their farms into other crops altogether (like sugar cane).

However, some farmers may not be able to adapt fast enough: smaller farms tend not to have access to technology like irrigation systems or newer varieties of coffee plant seedlings. This means they're more likely than larger farms to be impacted when weather conditions get worse due to climate change.

One study has predicted that under current conditions, by 2050 70% of suitable land for Arabica coffee will be lost due to climate change.

In a report published by the International Center for Tropical Agriculture (CIAT), researchers examined the impact of climate change on coffee production in five regions of Africa: Ethiopia, Uganda and Kenya in East Africa; Côte d'Ivoire in West Africa; and South Africa. The results were alarming: under current conditions, all five regions are expected to lose significant amounts of suitable land for growing Arabica coffee by 2050.

The authors say the two main threats posed by climate change to African coffee production are increased temperatures and changes in rainfall patterns. These factors can damage trees directly or indirectly through disease outbreaks such as leaf rust, which thrive at high temperatures. As a result, yields may decrease significantly even as demand increases globally thanks largely to rising incomes among consumers worldwide.

No matter what you think about climate change, it’s important to remember that the people who will be most affected by it are those who already live in poverty. For example, coffee is an important export crop for many developing nations and its production may decline as temperatures rise and rainfall becomes less predictable. With this in mind, we can all take steps to reduce our own carbon footprint, while also helping those who need it most.

At Treedom we grow coffee trees on numerous projects, across Africa. Click here to plant a coffee tree with us!