On El Pais a reportage on Treedom in Guatemala

On 8th November 2021 El Pais published - in the Planeta Futuro section, dedicated to sustainable development - a report by Asier Vera Santamarìa who visited one of our projects in Guatemala, describing the work we are carrying out with AMKA and the local communities. A report that you can read, in Spanish, on the website of El Pais at this address and that, for those who do not speak Spanish, we have reproduced it below.
Happy reading.

A tree nursery in the municipality of Petatán (Huehuetenango, Guatemala) is giving trees to indigenous Guatemalan women with the aim of planting 10,000 trees, thereby generating income to reduce the high levels of malnutrition in the region, which has been severely affected by climate change.

by Asier Vera Santamarìa - on Planeta Futuro by El Pais

Ana Julia Ramírez, a resident of Santa Ana (Petén), has received ten fruit trees, which is a "big advantage" for her because she no longer has to buy these products at the market. Ana Julia Ramírez takes care of the ten trees she planted in the courtyard of her modest, half-finished house, in the community of La Bendición in the municipality of Santa Ana in northern Guatemala. The saplings are still small, but Ramírez is confident that they will soon bear fruit and she will be able to put carambolas, lemons, mandarins, oranges and guanábanas on her table. She acknowledges that they will be of "great use" because she will no longer have to go to the market to buy these foods, but will be able to grow them herself and even sell them, so that "a little money will come into the household" where, she admits, she has been starving.

The fact that Ramírez was able to plant these fruit trees is thanks to an anonymous person on the other side of the world, who clicked on the virtual platform Treedom, which is responsible for planting trees in different countries around the world. This is also the case in Guatemala, where it is working in the departments of Huehuetenango and Petén in collaboration with the Italian NGO AMKA, on a project aimed at empowering indigenous women and achieving economic growth and social empowerment of women. Since the launch of this tree sponsorship platform in Florence in 2010, more than two million trees have been planted by local farmers in Africa, Asia, South America and Europe (in Italy).

Poverty in Guatemala has been exacerbated by the coronavirus, and hurricanes Eta and Iota, affecting 79% of the indigenous population.

This year, Treedom and AMKA have set up a tree nursery in the community of Petatán (Huehuetenango) to plant 10,000 trees in cooperation with 80 indigenous women. In this way, they will be able to generate an income within the framework of Sustainable Development Goal 5, established by the United Nations to achieve gender equality. This takes into account that 93% of beneficiaries report not working, while 80% of those over 20 have only primary education. According to a report by the International Labour Organisation (ILO), indigenous people make up one third of those living in extreme poverty in South America, and 7% of indigenous women live on less than $1.90 (€1.60) a day. In the specific case of Guatemala, the indigenous population makes up 43.8% of the population and 79% of this group lives in poverty.

The model in Huehuetenango is the tree nursery that has been operating since 2018 in the municipality of Nuevo Horizonte in Petén, which has enabled the delivery of thousands of fruit trees to ten communities in this poor community. 60.8% of the population of Petén does not have an income of 10,218 quetzales (€1,135) per person per year, and in Huehuetenango the figure is as high as 73.8%, according to the latest national survey of living conditions, from 2014. This percentage is higher than the average for the Central American country, which is 59%, with more than 23.4% living in extreme poverty.

Poverty has been exacerbated by the coronavirus pandemic and the impact of hurricanes Eta and Iota in 2020. Therefore, the UN Office for the Coordination of Humanitarian Affairs has appealed to the international donor community to provide €210 million to Guatemala under the Humanitarian Response Plan to support 3.8 million people in humanitarian need.

The UN warns that the number of people in this emergency situation has increased by 500,000 (15% more) compared to the 3.3 million estimated in the Humanitarian Needs Overview at the beginning of 2020, as the Covid-19 crisis and hurricanes Eta and Iota "are having a devastating impact on populations already suffering from chronic food and nutrition insecurity", affecting 3.5 million people in Guatemala. According to the UN Humanitarian Response Plan, most of the people in need of assistance are indigenous peoples (up to 2.25 million), as they are "exposed to high risks and do not have access to healthcare".

According to the latest FAO report, "The State of Food Security and Nutrition in the World 2021", 16.8% of the population in Guatemala suffers from malnutrition, a percentage higher than the Central American average (10.6%). It also shows that 42.8% of children under five suffer from stunting. From January to 9 October this year, 44 children in this age group died of acute malnutrition in Guatemala, more than double the number that died during the same period in 2020, when 16 children had died by that date, according to the Secretariat for Food and Nutrition Security (SESAN).

During 2021, 23,028 cases of acute malnutrition have already been recorded among children under five, compared to 21,017 a year ago. According to Unicef, every second child under five in the Central American country suffers from chronic malnutrition. For this reason, the Guatemalan government has launched the Great National Crusade for Nutrition with the aim of reducing hunger in this population group by seven percentage points by 2023, although this has not yet been achieved.

Against this backdrop, the Guatemalan municipality of Nuevo Horizonte, founded and inhabited by former guerrillas of the rebel armed forces (FAR), has distributed up to 17,000 fruit trees every year for the past two years to ensure the families' "food sovereignty", according to Silvia Sganga, AMKA's project assistant. She stresses that the delivery of the trees is accompanied by training for the women, to "empower" them, because "there is a lot of machismo and men think that women cannot work in the fields and do what they do every day". "Women want to empower themselves and learn, and that is our policy. We don't just distribute the plants and then leave, we go through a whole training process to prepare the land, prune the trees and fertilise the soil," she points out.

The tree donations are accompanied by training for women to empower them in the face of the machismo prevalent in Guatemalan society.

Sganga points out that once the planted specimens bear fruit, the women can "diversify" their diet to avoid malnutrition or diseases such as diabetes, and sell the surplus on the market to generate additional income for their families. In this way, an "alternative economy" would emerge, while ancient fruits such as the zapote, used by pre-Columbian civilisations in Central America and lost to deforestation in the Petén region, would be recovered. Every year, more than 27,000 hectares of forest disappear in this department of Guatemala due to deforestation and fires, according to the most recent map of forest area for the period 2010-16.

On the other hand, Sganga explains that most of the women who receive the fruit trees have not finished their studies and are dedicated to domestic work, so this project gives them the opportunity to "learn how to take care of the trees, something basic in this country of farmers". In this way, "autonomy and food sovereignty" is achieved, which, as she explains, goes far beyond food security, which is just being able to provide themselves with food and basic needs, as was the case after hurricanes Eta and Iota.

Deysi López Paredes looks proudly at the four trees she has obtained in the last few months, and which she tends every day so that they will provide her with oranges, mandarins and guanábanas in the future. This allows her to save "a lot of money" as she no longer has to buy these products at the market, where they are "expensive". She explains that the aim is also to sell them - she currently has no income as she looks after her one-and-a-half-year-old son and several farm animals in her home. "Until now, I didn't know how to plant and now I am taking care of the plants for the first time," says the 22-year-old, who stopped learning in fifth grade, when she was a teenager. "I wasn't interested in it, although I regret it, because when you try to get a job, the first thing they ask you to do is study," she regrets.

In the same municipality of Santa Ana, Estela Gutiérrez has five trees where she grows oranges, mandarins, gum and mangoes: "They have helped the family economy a lot, because we can eat the fruits that I produce myself," says this woman, who also does not work for pay because she always stays at home and takes care of her two children, aged eight and eleven. She has also received 50 chickens from AMKA, some of which she will eat and others she will sell for 100 quetzales (11 euros) each, which will give her family a small boost. Sganga explains that along with the tree distribution project, 5,000 chickens were also distributed to 100 women in Petén, so that with the money they receive from the sale of the eggs or the chickens themselves, they can vary the products they buy for their diet and eat healthier. 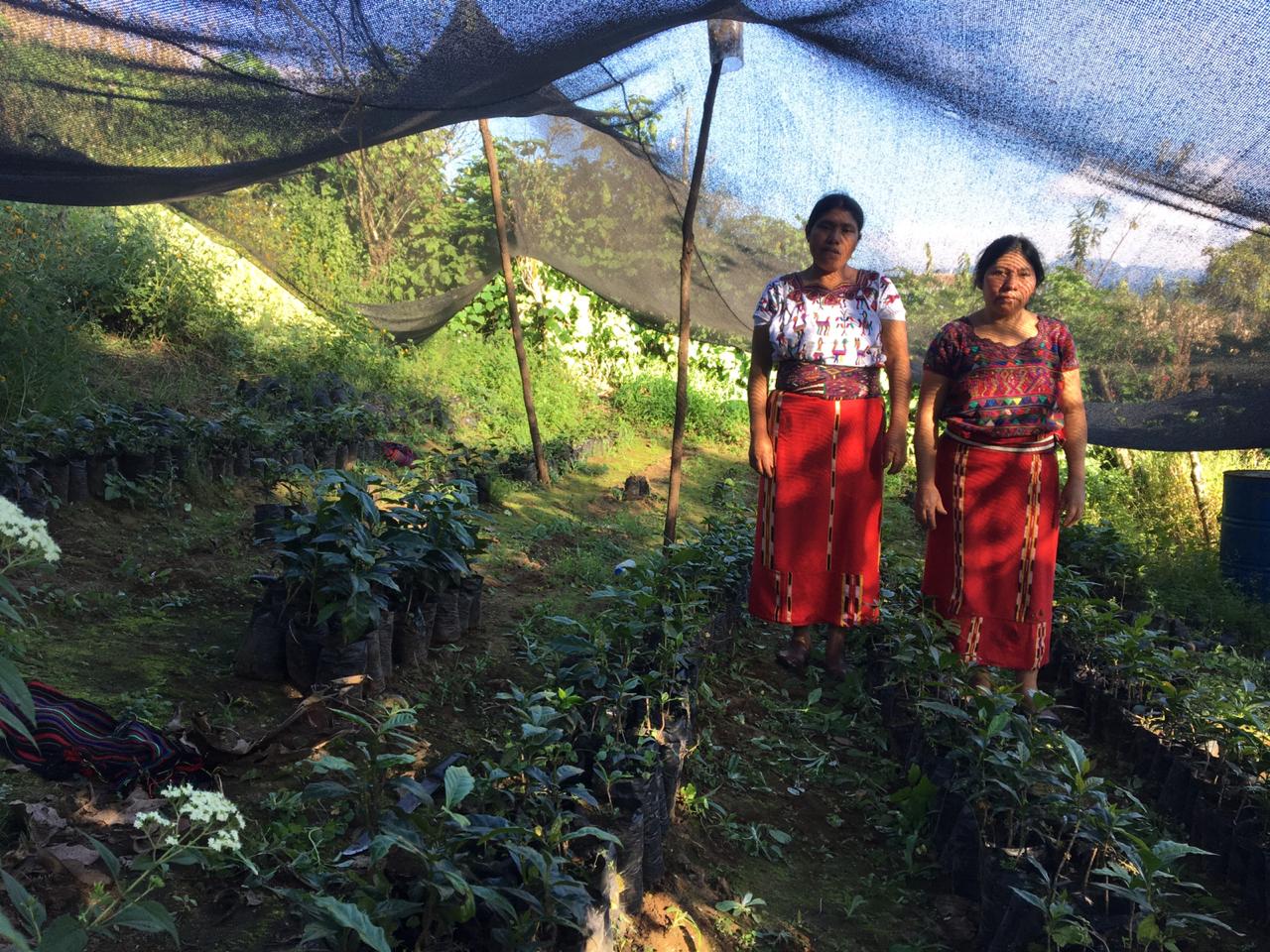 Before the trees reach the women's homes, Miguel Jiménez and two other men graft the plants in the Nuevo Horizonte cooperative's 3,000 square metre nursery. They have just received cacao seeds for the first time, so they are going to try to make chocolate. For a year, they take care of the saplings until they have grown, and then deliver them to the families, having first studied the needs of each individual and the space they have in their homes to plant the fruit trees. In the first year, 2018, they had to buy plants from other nurseries to make the first distribution to the communities, "But from April 2019, we started to produce our own plants, and thanks to the technical and economic support of AMKA and Treedom, we have reached an average of up to 17,000. We produce an average of 17,000 fruit trees per year: lemons, oranges, mandarins, mangoes, guavas, carambolas, guanábanas and species native to the Petén jungle, such as the sapote tree, from which the resin used to make chewing gum is extracted and which is now practically a relic."

Jiménez explains that the tree usually remains in the nursery for a year until it is handed over to the women. They then have to wait two to three years to see the first fruits, which then sprout permanently for at least 15 years, although this could extend to 20 or 25 years of productivity. The special thing about these trees, he says, is that they are photographed at the time of planting and geolocated, so that the buyer can know where their tree is and follow the development of the project on the tree’s own website, via the Treedom platform. In this way, the nursery managers can also map where each plant was planted.

Ana Julia Ramírez is enthusiastic about her fruit trees, to which she devotes all her time so that they bear their first fruits. She admits that she did not learn because her poor mother did not take her to school. What she did teach her, however, was "love of the land", and she instilled in her the idea that "cultivation might not help her become very rich, but it would help her survive". Now she emphasises that thanks to her teachings she was able to plant the trees that "were given to us with this love", and acknowledges that she is "happy because we are already going to see the fruits".