What’s the most incredible technology on the planet? Trees

Soon we will have access to a vast array of new technologies that promise to make our lives ever more beautiful. While we wait to find out if this is indeed the promise we need, follow us in this brief reflection on a technology that is so exceptional that we often forget about it.

The next frontier of technology for the masses would appear to be the metaverse: a virtual dimension, the details of which are still rather vague, but which we’ll soon have access to through a number of tools such as “classic” VR (virtual reality) viewers or AR (augmented reality) devices.The term metaverse comes from Neal Stephenson’s 1992 science fiction novel Snow Crash. In the novel, the metaverse is a virtual reality – shared on a worldwide fibre-optic network – that people escaping from the crumbling real world can access through public terminals. Within the metaverse, people are depicted by their own three-dimensional avatars.

Perhaps one Christmas in the not-so-distant future, most of us will be giving hi-tech gifts related to building the metaverse (even if, judging by Stephenson’s novel, this is a somewhat sinister prospect). In the meantime, though, we at Treedom still hold fast to two certainties.
The first is that this planet is still the place where we want to continue living. It sounds obvious, but it may be less so than we think.
The second is that although it’s all very well to be fascinated by future technological progress, no technology is as advanced as the one we often forget about and which essentially enabled life as we know it on this planet: trees (to put it simply).

Life on this planet hasn’t always been in the form we know today.

The Earth was formed just over 4.5 billion years ago from fragments of cosmic debris, and for 700 million years everything was pretty turbulent (involving meteorites and other upheavals). Things settled down 3.8 billion years ago, when the first rocks that formed under water appear in the geologic record.
Around that time, some 3.5 billion years ago, the Earth’s first atmosphere also took shape, albeit made up of nitrogen and various greenhouse gases. The species that were around then, namely bacteria and archaea, didn’t need oxygen to survive.

Around 2.7 billion years ago, however, a new type of life appeared on Earth: photosynthetic microbes known as cyanobacteria, which were able to use the Sun’s energy to convert carbon dioxide and water into chemical energy, producing oxygen gas as a waste product. The technology that changed the course of life on Earth had just been born; a technology that green plants started using and continue to use every day on this planet, making it what it is.

Think about it for a moment: a technology capable of harnessing the energy of the most important source in our system, the Sun*, and converting it into food (essentially carbohydrates – sugars and starches), generating oxygen as a waste product... It seems incredible, yet this is the natural technology behind life on this planet as we know it.

This is chlorophyll photosynthesis and, as far as we’re concerned, no metaverse and no alternative reality – virtual, augmented or otherwise – can compare with this totally natural technology. So natural that we tend to take it for granted, regarding it as something we learn the name of as children and then store away without having any sense of what it really is.

This is why we wanted to make tree technology the focus of our Christmas campaign, starting with chlorophyll photosynthesis and the life it has generated, and then looking at the many incredibly “hi-tech” aspects of trees and plants.

That’s why we’re deadly serious when we say: this Christmas, give the most amazing hi-tech gift there is – GIFT A TREE! 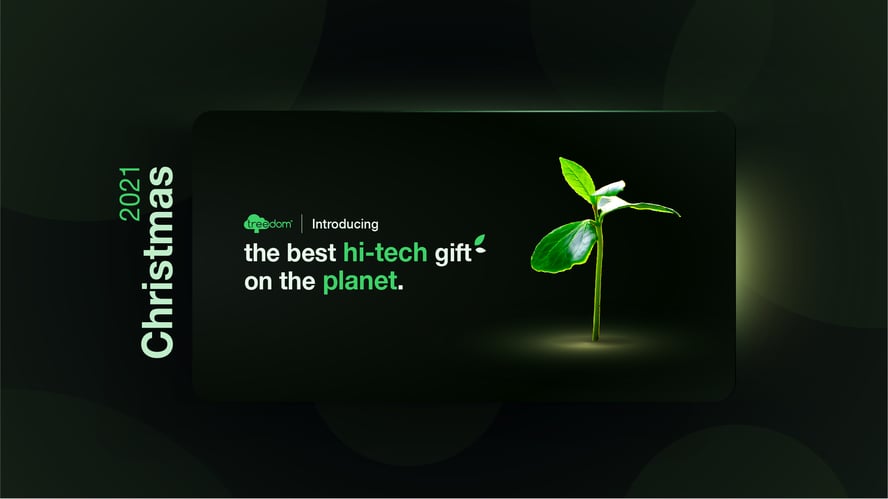 [*] The amount of solar energy captured by photosynthesis is immense – in the order of 100 terawatts[5], which is about six times what human civilisation currently consumes.