Roots of Words – The mountains are calling

An encounter between literature and nature. The section all about books related to the environment and sustainability.
What better season to tell the story of the mountains than winter? Two books to fall in love with, showing the mountains in all their fragile yet mighty beauty.

Paolo Cognetti, a writer born in 1978, is the right man to talk about them. He spent most of his childhood in the mountains, and he writes about them with the precise delicacy of someone who understands them deeply. The author is now well known outside his native Italy, where he won the Strega Prize in 2017 for this book, which has been adapted into a forthcoming film.
The novel is the story of Pietro, a child who grows up page by page, becoming a young man and then an adult. A solitary man who looks to nature for his family memories and nostalgia, shortcomings and mistakes. By his side is his friend Bruno, a steadfast and indispensable figure, the only one waiting for him even when time seems to be separating them.
The Eight Mountains is a book that befriends everyone who reads it, a confidant that teaches without judging. Melancholy and moving, (a heartfelt caress). 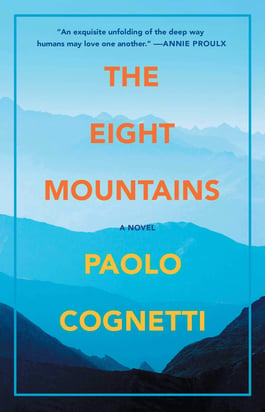 . “I felt that I could grasp the life of the mountain when there was no one around. I wasn't disturbing it; I was a welcome guest, so I knew once again that I would not feel alone in its company.”
. “The mountain isn't just snow and cliffs, ridges, streams, lakes and pastures. The mountain is a way of living life. One foot in front of the other, silence, time and measure.”

The Weight of the Butterfly - Erri De Luca

The second book is by another Italian author, Erri De Luca (and I apologise if it's hard to find this work in all languages). The author is originally from Naples, a city that lies between a volcano and the sea, but the mountains have long been a place close to his heart, and he is a skilled mountaineer. Even today, into his eighth decade, he continues to scale and explore rugged and spectacular peaks.
The Weight of the Butterfly is a coming together of two stories. The tale of the elderly king of the mountain goats, who recounts his thoughts and his days lived between valleys and peaks, and the story of a hunter who has made the mountain the place from which he draws sustenance, imbuing it with his reason for living. Two different forms of solitude that collide without ever touching – almost. Two opposing perspectives that invite reflection.
The style is highly evocative, with certain words that are impossible to escape from. Some are as demanding as scaling a cliff, while others (to mention an image that recurs frequently) are as light as a butterfly sitting on the horn of the king of the mountain goats. 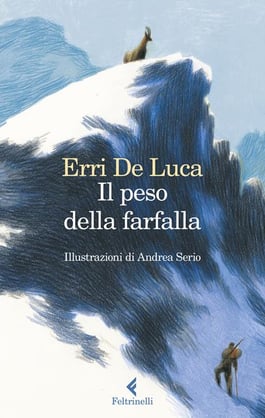 . “In every species, it is the solitary who try new experiences. They are experimenters who drift astray. Behind them, the open trail closes in on itself.”
. “He had followed stags, roe deer and ibex, but mostly mountain goats, the beasts best adapted to scampering across the precipices. When it came to that predisposition, he admitted to feeling a nudging envy. He edged along the mountain faces on all fours without a shred of their grace, unlike the mountain goats who need not even look down, distractedly letting their feet do the work. Man too could scale lofty obstacles and climb where the goats roamed, but he could never achieve their understanding of altitude. They lived in it; he was a passing thief.”

. Roots of words – Into the woods