Roots of Words: women and nature

An encounter between literature and nature. The section all about books related to the environment and sustainability. To celebrate 8 March, we’d like to recommend three writers who tell of nature in the broadest sense of the term. Three women who have made their mark on the world of literature and beyond.

Reeds in the Wind - Grazia Deledda.

Grazia Deledda was a Sardinian writer who lived in the late nineteenth and early twentieth century. In 1926, she became the first Italian woman to receive the Nobel Prize. The book we’ve chosen is one of her most famous, as it encapsulates the central themes of her writing. It tells of human frailty, the ancestral bond with one’s land and its traditions, and the clash between modernity and the past. Reeds in the Wind tells the story of the Pintor sisters and their family – former nobles in the rural Sardinian village of Galte – in the shadow of impending demise. What is striking is the alternation of a natural landscape that is both real and poetic with the magical and fantastical landscape of the night, inhabited by the elves and sprites of Sardinian folk tradition.

Every time he left it he looked back at it like that, tender and sad, just like a migrating bird. He felt like he was leaving the best part of himself there, the strength gave him the solitude, the detachment from the world. And going along the road up through the scrub land, he felt like a pilgrim with the woollen bisaccia – the woven length of material that served as a saddle bag or knapsack – over his shoulders and an alder stick in his hand, headed towards a place of punishment: the world. 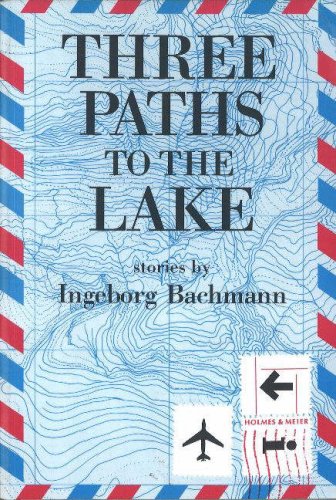 Ingeborg Bachmann – poet, journalist and writer – lived through the war-torn years of the 20th century. Three Paths to the Lake is a collection of five stories, all with female protagonists. Bachmann excels in describing the female universe and emphasising the presence of nature – the invisible thread that links the five stories. The protagonists walk the forest paths in search of their own direction, a metaphor for the life that has been and that awaits them. It is a never-ending journey that helps us reflect on the imperfection of human relationships, disenchantment and illusion.

Elisabeth [...] noticed that although she had actually experienced it all, then again she hadn’t, there was something bleak and empty in all these stories, and the bleakest part of all was that she had really watched it happening, but her life had run a different course, had often passed her by as though she were a spectator, a member of the audience going to the movies day after day and letting herself be drugged by a counter-world.

Sylvia Townsend Warner was born at the end of the nineteenth century in England and trained as a musicologist – a profession she never pursued due to her lifelong love of literature. The novel we’ve chosen – Lolly Willowes – is incredibly original. It’s the story of a wealthy unmarried woman who, tired of hypocritical and self-righteous societal pressures, gradually becomes a witch. She suffers anguish and doubt, she yearns and she ponders, and she confides her tribulations to nature, which is sentient. The woods, the wind and the trees talk to her and hold her hand. The key to Warner’s brilliance is twofold: witty irony and a keen eye for observing the world. It is the manifesto of a period in time that has enabled us – through the revolutionary thinking of women like her – to get to where we are today. It’s up to us to keep on moving forward.